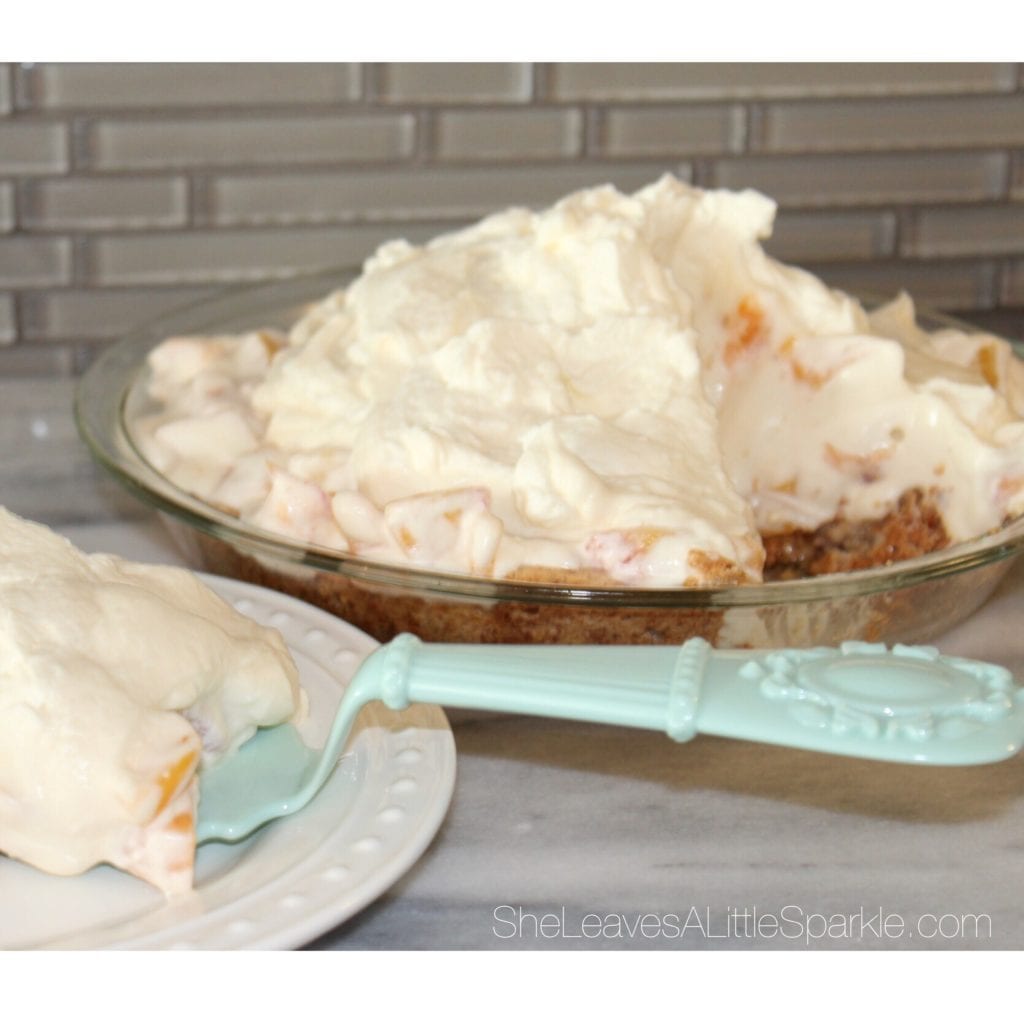 First off, Happiest Fathers’ Day to all the wonderful, loving, men out there that provide for their family and leading by righteous example! What a sacred an important role and calling that is! My dad has been very influential in my life. I prayed for a good man to be that same kind of father to my children and I’m so grateful to have found one and married him.  There’s not much I wouldn’t do for that man, and when he asks for something he loves… he usually gets it. Which includes making him a Peach Meringue Pie!  “It’s the best dessert I’ve ever had,” he says. It definitely one of his most favorite things that I make.

My husband, Josh, had never tried this Peach Meringue Pie until we got married and my family introduced it to him.  I’ve never seen him act that way as he took each bite. LOL! He really inhales food that he loves but not this one… Josh savored each bite and it was hysterical as it reminded me of Bill Murray in that food scene from “What About Bob” haha.

This Peach Meringue Pie is a family recipe and my Great Grandma Croff made it for years and passed it down.  I thought it would be fun to share with the rest of you and I hope you love it as much as we do!  I love peach cobbler, homemade peach ice cream, peach shakes…anything peach. But this Peach Meringue Pie takes the prize! It’s very simple and you make it in 2 parts with the crust and then the filling. Oh, and it makes 2 pies, so that is a bonus!

Let me preface this by saying, I really don’t care for pie. I don’t like pie crust, especially dry pie crust.  But this is no ordinary crust.  There are no words…you just need to make it and see what I mean.

Ingredients:
Pie crust (aka A little bit of heaven in your mouth): 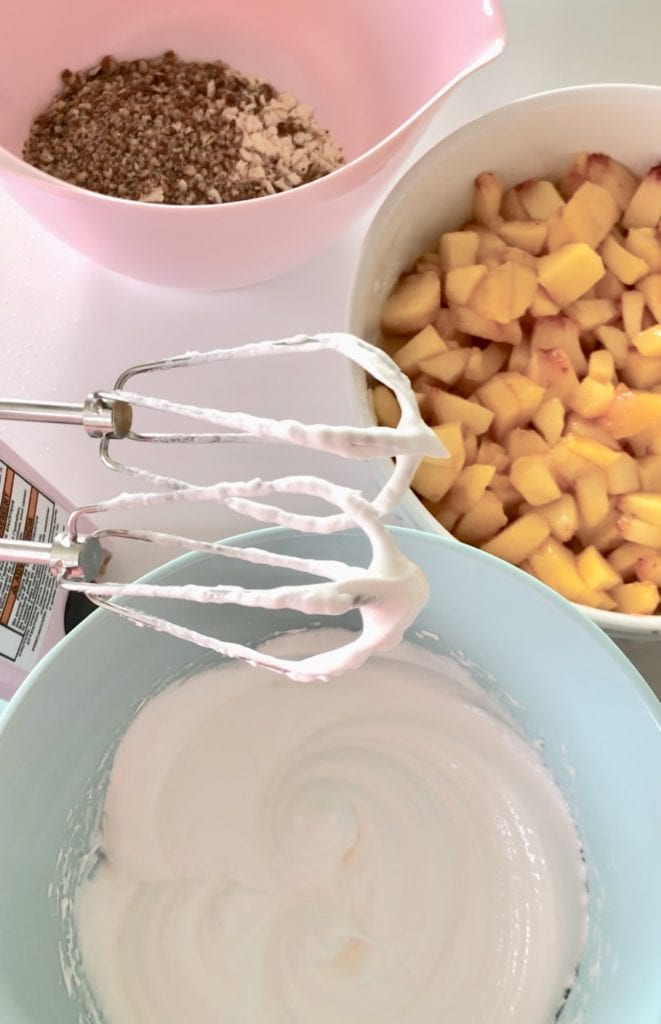 Fold in crackers, vanilla and nuts. I put the crackers and nuts in large ziplock bags and smash them with a rolling pin, like this or this one. 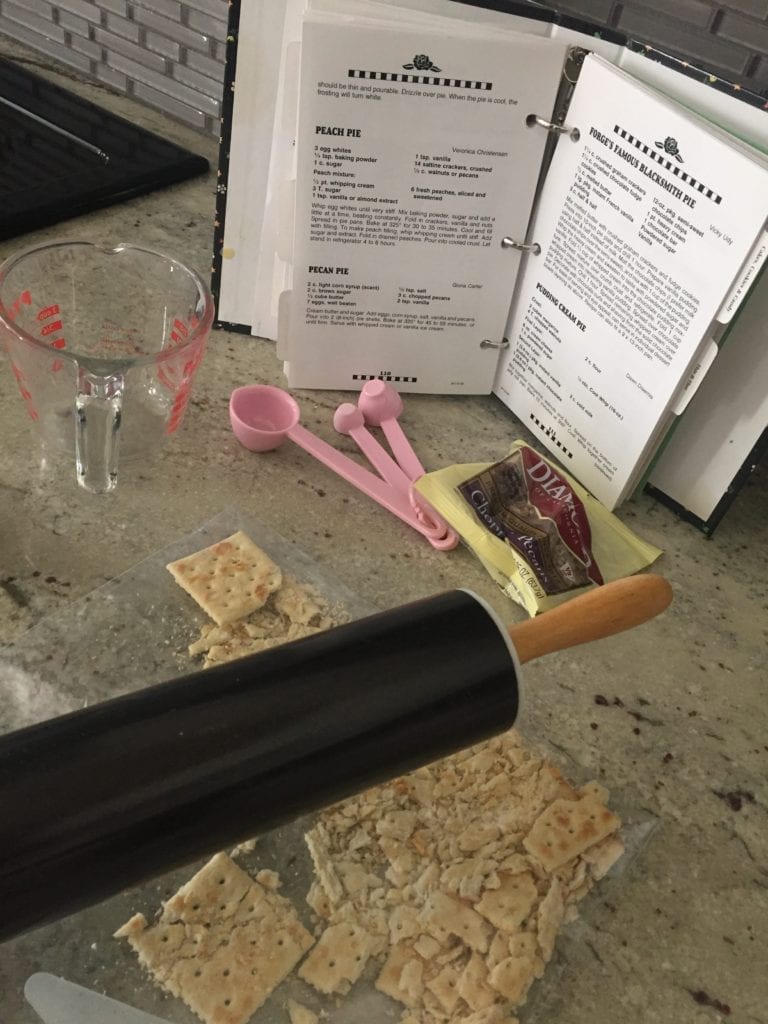 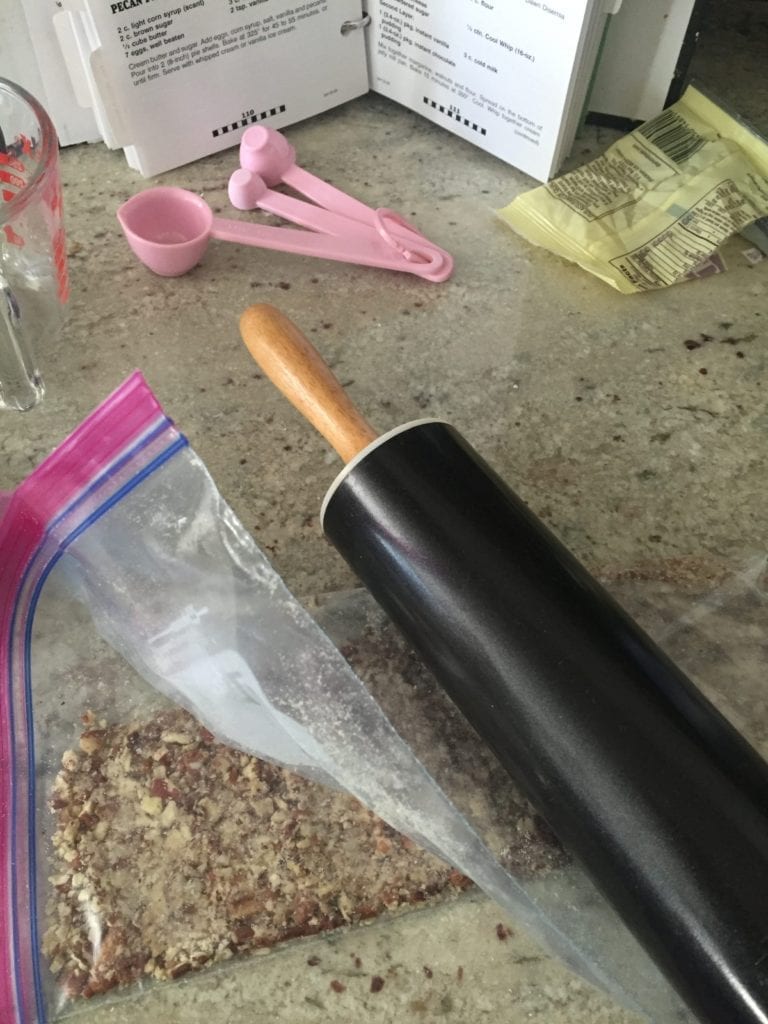 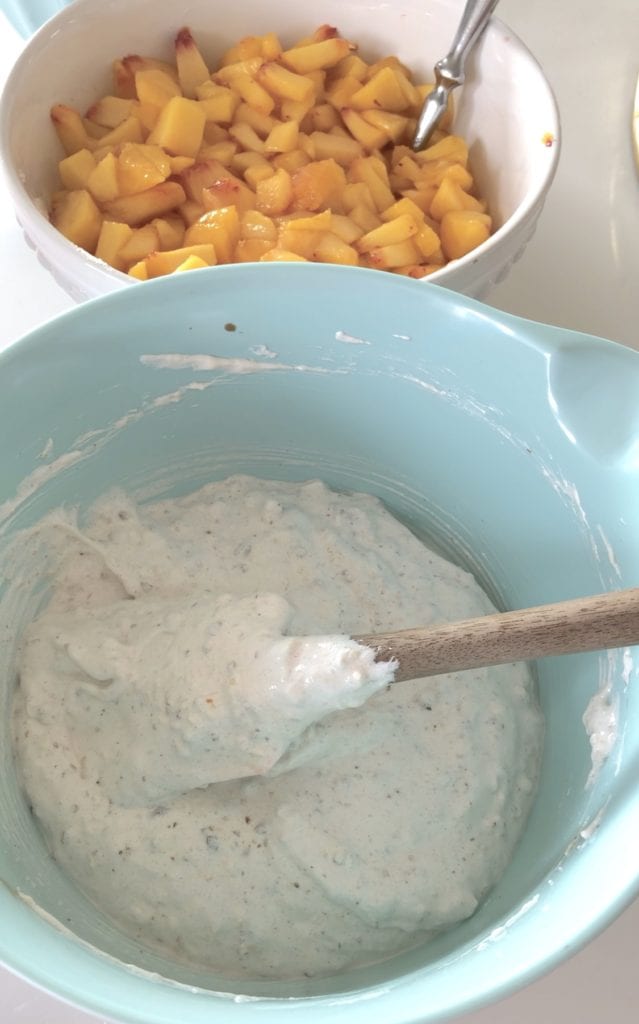 To make peach filling, whip whipping cream until stiff.  Add sugar and extract. Fold in drained peaches. Pour into cooled crust.  Let stand in refrigerator 4 to 6 hours. ( this is where I get impatient and have done it in two or three 😉 but it tastes better, the longer the peaches have to seep into the crust.)

Additional whip cream is not necessary!  This Peach Meringue Pie is not a tall dessert.  But I like to make some extra whip cream and then just put a dollop on each slice as I serve it to make it look less “flat” and give it more appeal.

My Great Grandma Croff got this recipe from her mother and she passed it down and kept being passed down to me….5 generations of loving this dessert! 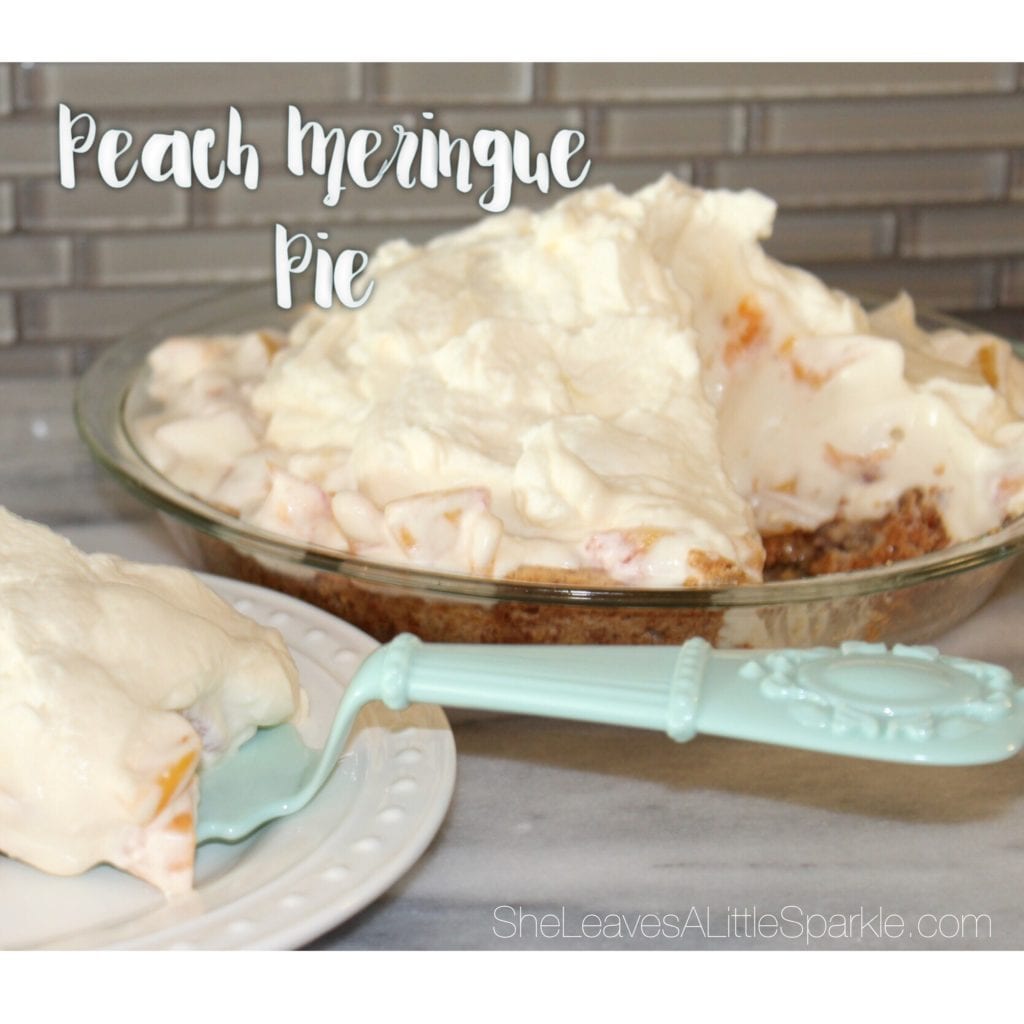 And if you’re wondering why there are not any stiff meringue peaks on top like a traditional meringue pie, it’s because the “meringue” is made as the crust, as you will see.  Now, THAT is the way I like meringue! 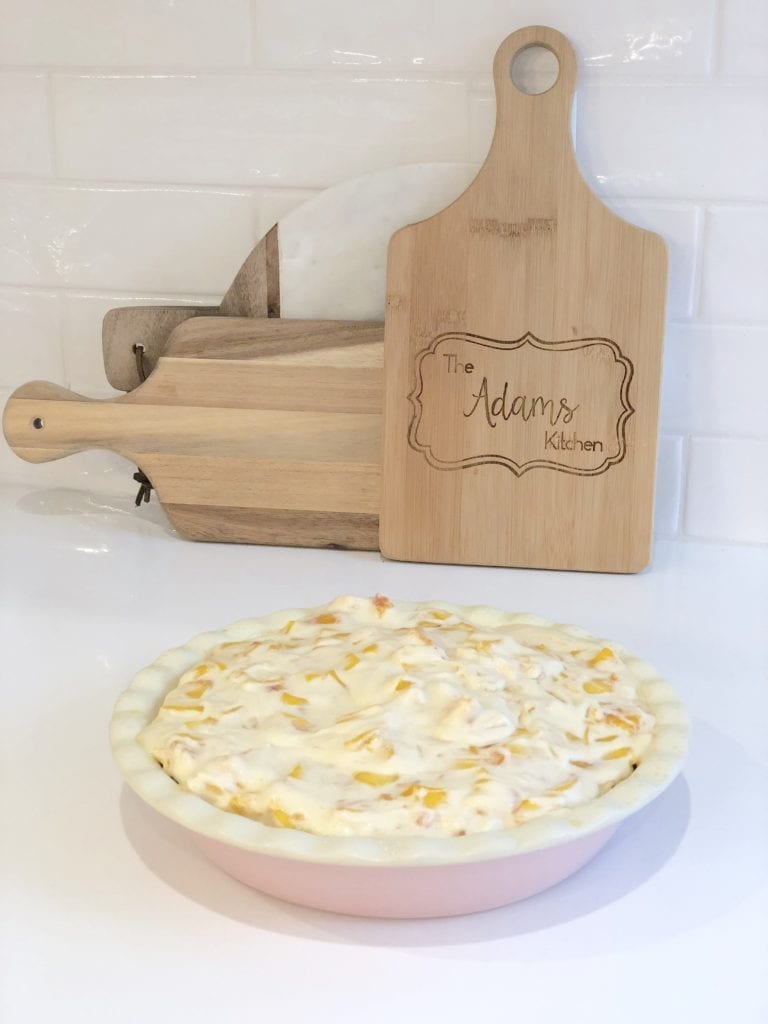 Update Aug 2018:  I made this pie again the other day for my husband’s Birthday. Here’s a picture of how much “shorter” or “flatter” the pie can look when you don’t drain the peaches all the way from the sugary juice it’s been sitting in. But no worries! It’s just as delicious! It tastes every bit as good, just doesn’t look as fluffy. So there’s no need to fret over the appearance.

Bon appetit!  And don’t forget to pin this Peach Meringue Pie recipe and save it so that you always have it and can pass it on too!

*Note: Post contains affiliate links and sources throughout the post. Where product is no longer available, a similar substitute has been listed. 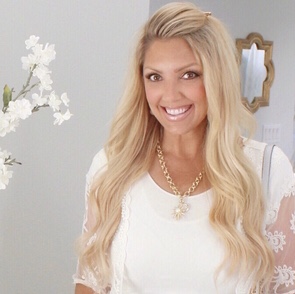 Switch To The Safest Beauty 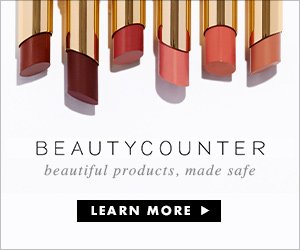